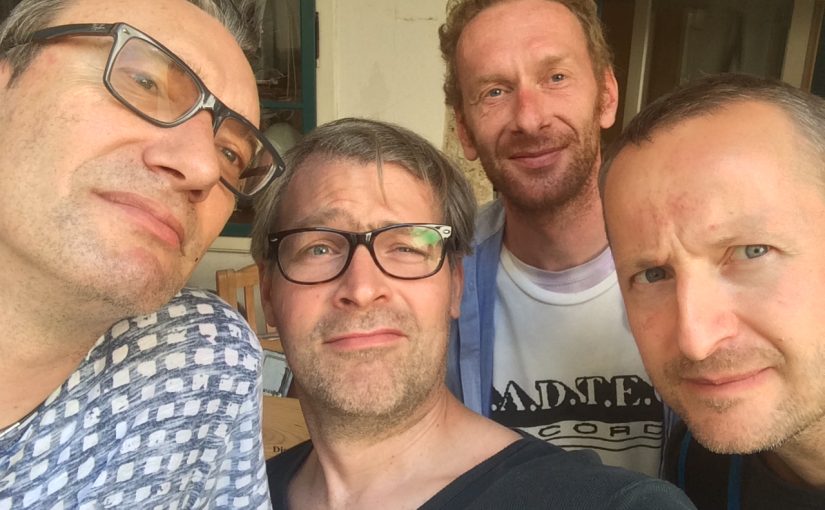 Sans Secours was my first band. Together with Uwe Bubik (Bass / Voc), Cheever (Git) and Daniel Bauer (Dr) we started in 1990 in Graz. Our first demo “Avec” was produced by Oliver Welter (git & voc of Naked Lunch) and the artwork was done by Dieter Puntigam.

In this lineup we recorded another EP called “Sans Secours”, a LP called “Harris” and a demo called “Live Dubs”. Our first internationally released album came out in 1997 and was titled “Need”. Daniel left the band shortly before the album was released and we left to Dortmund Germany and Heli Zechner (former 3 Gordons) joined the band on drums.

From here on the band really started to work hard. Together with our Manager Bert Offermann  from “DOXA Records”, we played nearly 200 Shows in 3 years in Germany, Austria, BeNeLux, France, Switzerland and Slovenia.

In 1998 Heli left the band and Rainer Binder-Kriegelstein joined it. In this year we released a „vinyl only“ EP called “Boogie Down” and in 1999 a LPCD called “Reverb”.

So far we did these records together:

In summer 2017 Heli, Cheever, Uwe and me started to rehearse again and played some reunion shows in Germany and Austria. We‘re planing to release a new album in 2018 and play some shows in summer and fall. There’s more to come….